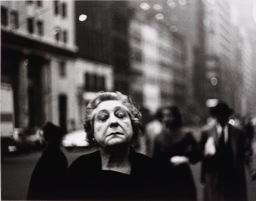 It’s been a while since I’ve organised a Monday Master but I felt like it was a good time to do one again (I’m on the Polish winter break meaning I have a bit more time this week). As such I thought I’d look at a hugely influence photographer on the history of photography, Diane Arbus.

Who was Diane Arbus?

Diane Arbus was born in 1923 and came from a very well off background. Which probably helped contribute to her connection with art and photography which also appeared in her father and siblings own art (certainly a high class background isn’t required to be interested in photography as we saw with Jimmy forsyth). She started a photography studio with her husband Allan Arbus focusing on commercial and fashion photography. However, she left both him and that business and started shooting on asingnment.
This was a step on her path toward shooting the type of images that she is most well known for. Shooting the usually forgotten members of society and “freaks”.
One of the things that is very apparent in Diane’s work, is that even though she is shooting deliberately shocking subjects (those with strong physical differences, or intilectual imparements), the images aren’t overly gratuatous or trying to stir up as much shock as possible. At the same time, she often takes very “ordinary” photos which aren’t designed to create the most flattering impression of the subjects.
In

What I take from Diane’s work

Diane’s style and influence can be seen (and contrasted) in many street works which either follow Diane’s stance and try to show people “plainly” and are more “rough around the edges” verses the highly processed and posed images that some people choose to label as street photography or portraits. Personally, I feel she treads the ethical line of photographing neglected subjects well. I don’t feel like she tries to pull on the viewers heartstrings heavily by creating unrealistic images and nor do I feel that she tries to ridicule or demean the subjects in her images either. It’s something I try to consider when I approach taking images of certain subjects. I don’t want to take advantage of them, demean them or ridicule them. It’s why I never take a photo of a homeless person as I feel it almost inevitably is for the photographers fame.

A Diane Arbus Picture to check out

I choose this picture because it has a solid composition and an interesting subject. The woman in the photo is resting her eyes for some reason while walking around. Perhaps she is tired, but her head position gives the impression of looking down on someone or not even ackoloedging the people around her. She looks like she isn’t poor though it’s unclear how well off she is from this one image.
Compositionally, she has frozen the subject in the middle with a few lines pointing towards her. The separation and figure to ground aren’t that strong but she has used a shallow depth of field to help isolate the subject. Although it is a shallow depth of field, you can still make out several details in the background like the two younger women to either side (perhaps the older woman is looking down on them or remembering when she was younger) and there is a white car on the street, plus the buildings of course.

Monday Masters is your chance to share a great photographer’s work who you love. To join in, all you need to do is pick a master, and share a bit about them and a photo of their’s you like (careful of copyright). Then share it with the hashtag #MondayMasters