About a month ago I was on an excursion with a group of kids for my job. We had an hour or so free and were on Oxford street where there is a Jessops store. I had been wondering just what Fuji cameras were like for a while after reading some positive reviews of the X-t1 and particularly the X100 series for street photography. So I went in, picked up an x100t and played around for a while.

A week and a half later An x100t arrived for my birthday. That was not a coincidence. The 10 mins I played around with it convinced me that it was the camera I had been craving.

That was about half a month ago and so now I’m ready to put up a little Fuji x100t review. This won’t be a detailed break down of the sensor quality (I don’t know enough about that) or all the features (I’m planning on having a series of posts going over those). But instead it will be some general impressions, what it’s like to use, why I like it, and what isn’t perfect about it.

The Fujfilm x100t is the third model in a series of x100 cameras from Fuji. These cameras take inspiration from the old rangefinder cameras like Leica, in fact, many consider it a budget Leica. It has an APS-C sensor (smaller than full frame, bigger than micro four thirds like Olympus) and clicky manual controls. The big feature of this camera is it’s fixed lens which is 35mm (full frame equivalent and the same as your classic disposable cameras of years gone by). This fixed lens means that the camera is small but still high quality.

It isn’t a cheap camera but you can find a cheaper version by going for the x100s (2nd gen) or a second-hand x100.

The fact that this camera has a fixed lens takes away one of the key reasons people would choose a specialist camera over a smartphone (especially as it has a very similar focal length to a smartphones camera). However, don’t let that fool you. This camera is a step up from a smartphone (not that there is anything wrong with shooting pictures with just a smartphone). 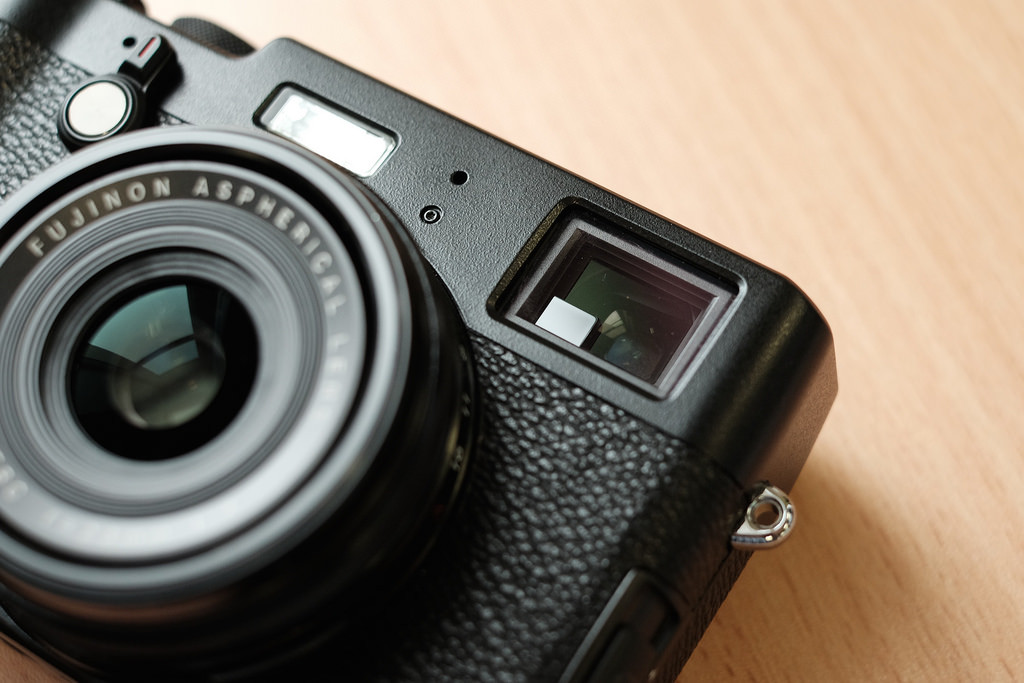 The biggest mistake I made when I grabbed my first specialist camera (olympus E-P5) was choosing a camera without an inbuilt viewfinder. I didn’t think it would be a big issue considering how I was used to smartphone photography from a large LCD screen and I had an attachable viewfinder. However, a good viewfinder makes a big difference.
The fujifilm x100t has an amazing viewfinder. It combines an Optical and digital viewfinder. This means you can either have an optical view finder through a piece of glass with a heads-up display showing metering and basic camera settings as well as the frame and focal point, or you can have an electronic viewfinder showing how the picture will appear (more or less). It’s gorgeous and the best of both worlds. You can easily switch between the two.
There is also the option of a viewfinder within a viewfinder, a small LCD screen which shows a close up of the focal area. This can be useful with the optical viewfinder to give you the best of both worlds (optical and electronic) but can be a bit distracting at times. Again it’s really easy to switch between settings.

The back LCD is also big and bright. You can quickly switch between settings allowing you to either have the lcd screen on all the time, never, or when you aren’t using the viewfinder. The rear screen can also show you your settings, what you are going to shoot and allows you to review images and go through your menu settings. It’s a good screen but it would be great if it rotated to assist with low and high angle shots. I expect this to come soon but it is a shame it isn’t already there.

I simply love the controls on this device. Unlike a DSLR which usually has spiny wheels next to the shutter button which can sometimes be customised (hi there Olympus), Fuji have favoured more classic controls akin to old analogue cameras. On top you have two wheels. One for exposure compensation, the other for shutter speed [ranging from 1/4000 up to Bulb mode] on the lens there is a turny wheel to change aperture from f/2 to f/16. Some really nice touches are that the shutter controls go up in stop changes and the aperture controls in third of a stop changes (older models have stop changes) with stop changes marked on the lens.

This makes it easy to use manual mode and work without raising the camera to your face make adjust as you go into a brighter or darker area. Plus you feel really in touch with the camera.

If you are looking for a camera to take anywhere and everywhere then the Fuji x100 is a pretty worthwhile choice. Sure a Sony rx100 or alternative point and click would be smaller but the x100t will fit into big pockets and small bags with little trouble. This is largely helped by the built in lens which saves on some space.

This small size (and light weight) help to make it easy to keep on your wrist or shoulder always nearby. There are smaller cameras but balancing the viewfinder, sensor size and other features, it is a good mid-point. 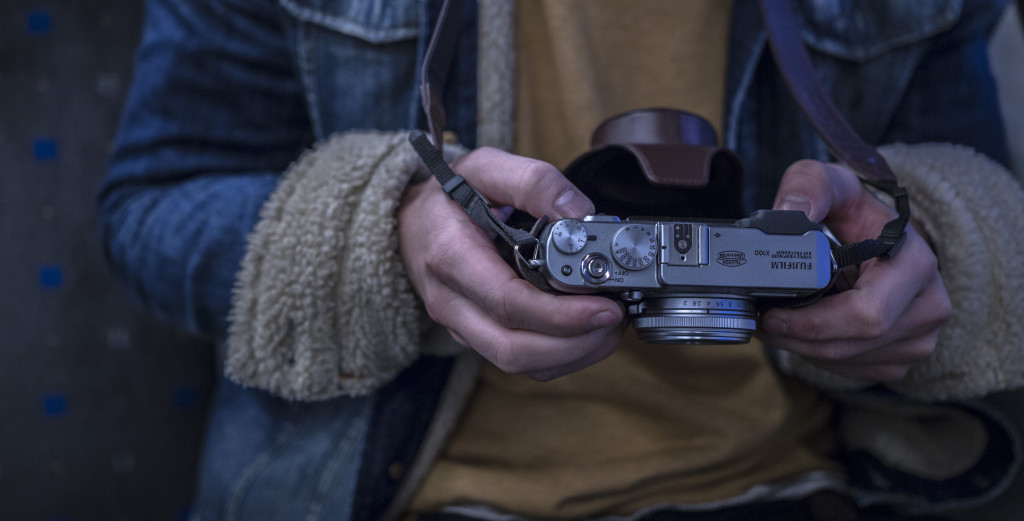 As with any new camera, the Fuji took a little while to get used to. Finding where the different controls where [for example how to change the ISO] took a while but the essential controls are very easy to find and adjust. This helps to make it a great camera to use in manual mode. The optical and electronic viewfinders offer informative displays so that you can quickly take a well exposed picture.

In general I aim for around 1/250 or faster and f5.6, that way I can easily make the aperture larger for shallower depth of field or have a slower shutter so that I can take a long exposure photo.

The small, unobtrusive size, makes it easy to take around and non threatening. Something like the Olympus OM-D E-M1 looks a lot more professional and intimidating, especially with the 12–40 pro lens on.

The fixed 35mm lens is a great creative constraint, the fact that you only have one focal length means you have to “zoom with your feet”. While “zooming with your feet” can be a load of tosh, it is also a useful idea and very helpful to get people more used to moving. I am certainly more active when shooting this camera.

It’s not perfect though. I wish ISO settings could be accessed quicker. Perhaps instead of the exposure compensation option. There’s no in camera image stabilisation unlike olympus cameras so you have to be really careful with slower shutter speeds, the fixed focal length means you can’t take certain types of photos (even with the lens converters which add 50mm and 28mm equivalents). And you only have 1 SD card in at a time [no backup] and the battery life could be better [it’s not bad mind]. Plus some people will not like that it isn’t a “full frame” sensor.

[on a personal note, I’ve had some issues using the remote camera app, though I believe this is linked to my use of the iOS 9 beta, and not the fault of the camera. I’ve tried the Android app and had no issues with it.]

Honestly, I just enjoy shooting with this camera. It is not the best camera for a lot of types of photography. It can’t make supper bokehery backgrounds in portraits, nor can it zoom in on a long distance target. However, it is great fun to shoot with an encourages me to take more photos.

If you are looking for a camera to take better pictures of your children/pets or to take a step up from your smartphone or for a great camera for street photography (without the Leica price tag] then you aren’t going to find much better.

For a slightly cheaper and missing a few features similar camera you might want to check out the Fuji x100s or Fuji x-pro–1 with a 28mm lens.