The best and worst thing about the Fuji X100t is its fixed lens. Having a fixed lens makes it smaller and more portable as well as encouraging a 1 camera 1 lens mindset. It also means that if something happens to your lens…well your up a certain creek without a paddle (oh and you’re stuck with 35mm). In truth, there are a couple of things you can do to mitigate this risk and that’s where the Fuji X100 series lens hoods come in. I picked up an official Fujifilm X100t lens hood (Fujifilm LH-X100) and this is a review as well as a brief look at some alternatives. But first…

Why bother with a lens hood

Just before my trip on the Camino De Santiago De Compostela I came to the conclusion that I needed to get a lens hood and that I wanted the official Fuji lens hood. The second part was largely due to a conversation I had a year earlier with another Fuji x100(s/t? I can’t remember now) user about accessories. I was worried about dirt getting onto the lens and bumping my camera into an object and damaging the lens. I also knew it would be bright and thought that the lens hood might help keep lens flares to a minimum.
In the end I got the official Fujiflm lens hood (Fuji LH-X100) and a lens filter and kept them both on the whole time. It was definitely a worthwhile investment (in both) as the filter picked up lots of dirt on certain days when it was really windy and we walked on dusty paths.
Those reasons are the main ones people give for using a lens hood on a camera.

What’s Good About the Fujifilm LH-X100

You’d expect the official Lens hood to be the best so that is the standard we’re going to hold it to. Especially as it costs a fair bit more than other options. The LH-x100 is made of good solid metal and comes in two parts. The first part attached to the camera lens ring, the second part attaches on top and blocks light from entering from sharp angles. 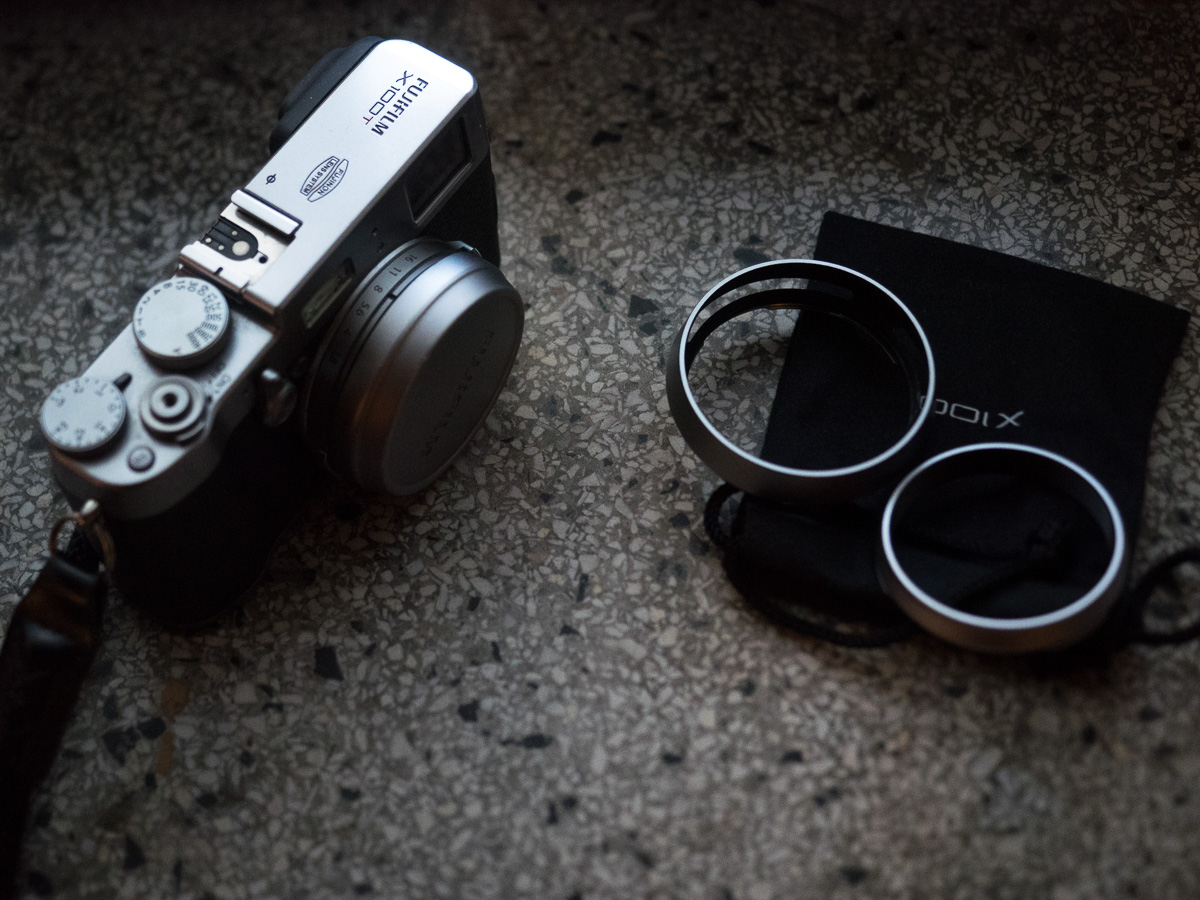 When you buy the Fuji LH-X100 you also get a nice little bag to hold these different parts in. This really comes in hand when you take off the lens ring cover so you can attach the first part of the lens hood.
(While we’re on the topic. Here’s how to attach the lens hood. Put your lens cap on, Press down and twist counter clockwise. This will loosen the lens ring. Now you can screw on the first part of the lens hood and then click on the second part.)
You can also attach a lens filter beneath the lens hood if you want to (I did) but that adds the lens focusing issues that are common with the fuji x100t. The lens hood does the job that it advertises and helps to protect your lens from the sun and impacts. One of the really nice touches of using a lens hood is that you can hold the lens hood instead of the focusing ring. This stops you accidentally moving the focusing ring off your zone focus or hyperfocal length (if you shoot that way…which I do). It also feels very solid in your hand and so is reassuring.

What’s Bad About the FujiFilm LH-X100

Overall the LH-x100 does the job and so there isn’t that much you can complain about. However there are a couple of aspects that aren’t perfect. The first is that it isn’t fully compatible with the Fuji x100 lens cap and it doesn’t come with its own lens cap. Admittedly, part of the point of a lens hood is to replace the protection a lens cap should offer. However, it would be nice to also put the fuji lens cap on the hood (or have another lens cap included for the filter.)
You can take off the second part of the lens hood and then rest your lens cap on the primary part of the lens hood. This is what I did and it worked…okay, but it is not a great fit.
Then there is the fact that the lens hood blocks your flash slightly. This means when you use your flash, you’ll get a darker circle in the bottom of the image as the lens hood stops the light from traveling properly. You can solve this by using an external flash…or taking the lens hood off.
The final aspect is the price. Yes, the lens hood is made of metal and it is the official lens hood but when you compare the $70 price tag (currently reduced) to $20 and $10 alternatives from third parties (more below) it is hard to justify.

Speaking of cheaper alternatives JJC provides an all metal adaptor ring and lens hood for around $10. I can’t testify to its quality but all the online forums and reports seem to suggest it is just as good and provides the same protection as the official one. I can’t think of a reason not to choose this option over the official one other than LOVING fuji and wanting to give them all your money.

JJC also offer a slightly different lens hood for the Fuji x100 series which has one key advantage. It doesn’t block off the flash of the camera like the JX-100. Instead turns inwards and doesn’t flower outwards. This makes it look different (not as cool?) but keeps your inbuilt flash functioning as it should.

The fuji LH-X100 is a decent lens hood that does the job required of it. It is strong and a useful accessory to help provide a bit more security and peace of mind when using your Fuji x100t (plus it makes it look cooler). However, the JJC LH-JX100 is just as good and cheaper.