Welcome to another MondayMaster, yup that’s right we change the name from MondayPhotoPick to MondayMasters because alteration sounds better and it’s a little bit shorter which helps with Twitter. This week it was Yuri’s choice and he picked one of the absolute greats of Street photography, Mark Cohen.

Who is Mark Cohen?

Mark Cohen was born in 1943 in Pennsylvania, USA. The majority of his work has been shot in the two towns he has lived in within the USA including Scranton, setting of the US version of The Office (no pictures of Jim or Pam though). He is known for shooting with a very wide angle lens, up close, and using a flash. He usually focuses on the details of people and yet also has context (thanks to the wide angle) and manages to find interesting aspects within those details. He also posed people a lot in his images.
He was one of the first to approach images in such a way and as such has been a huge influencer on modern street photography in contrast to some traditional, shot from a distance while not being noticed.
I really want to pick up his latest book FRAME which is a retrospective collection.

My MondayMaster Pick for Mark Cohen

Cohen is another photographer who I could pick a whole host of different images to be my pick but I settled on his image of a young boy smoking. 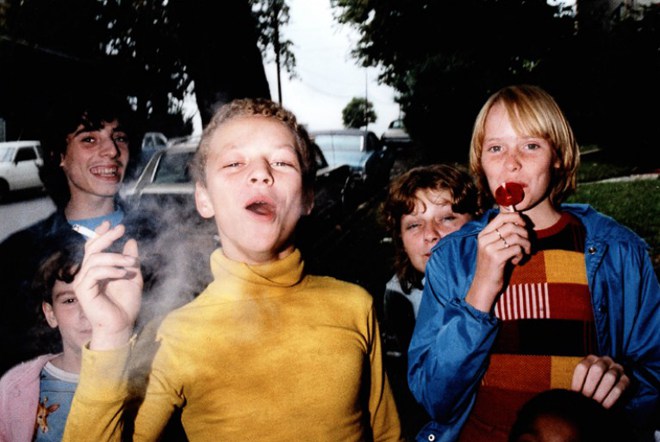 I think the main reason I like this image is the mischief going on here. The main subject looks proud and showing off, the kids around him laugh at what he’s up to and the contrast of the lollipop (for kids) and the cigarette (for adults) is great.
The colours are also bright and vibrant with the blue and yellow contrast in the two foreground figures. The flash helps to separate the kids from the background as well. Compositionally, I’d say that the main kids head actually has a tree coming out of it (rookie mistake) but I don’t think it really matters that much in this case as the depth of field and flash help to minimize that distraction. Apart from that, there is a lot spread out around the image which keeps it well balanced.

Why don’t you join in with MondayMasters and share your favourite Mark Cohen picture, or check out Yuri, Marie and Brooks picks.