One of the beautiful aspects of Street Photography, is the opportunity to see a glimps into a different world in a different country. It’s amazing how often similar themes can be seen across vast cultural divides and yet there are often subtle (and not so subtle) differences. Tatsuo Suzuki is this week’s Monday Master and his work invites us into the frantic world of Tokyo in Black and white.

Who is Tatsuo Suzuki?

Tatsuo Suzuki is a Japanese street photographer who started shooting in 2008 while he worked full time as a businessman. He started shooting after work and at the weekends. His focus on shooting people comes from his self professed fascination with people and lead to his style of getting close and interacting. He also references his use of Black and white due to the fact that he believes it helps to show passion and emotion better. He mixes both shooting with and without permission though from the looks of things the majority of his work is without permission.

My photos are assets in the past. I would like to take better shots today than yesterday, and better ones tomorrow than today.Click To Tweet I walk around through the streets, if I find charmed subjects, I just shoot. Sometimes I talk to them to shoot their portraits, sometimes no talking, just street snap.Click To Tweet I only shoot objects I like when I find them. I follow my own instincts. I do not want to copy someone else’s style.Click To Tweet I don’t know much about the theory of the art. I only take pictures every day of my life.Click To Tweet 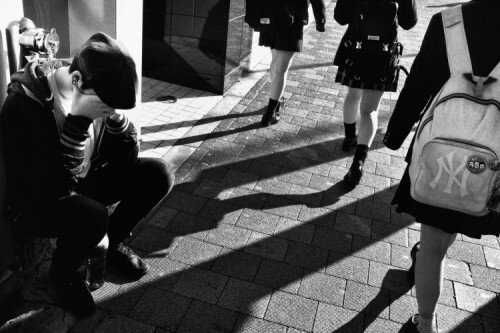 I wanted to pick and image that reflected Tatsuo’s style of getting close to subjects, focusing on emotions and also the franticness of Tokyo. I decided to go for this image because it contains several of those elements. The subject on the right who looks in some sort of despair, the trio of girls in stereotypical Japanese school girl dress rushing off into the distances and the use of harsh light to create interesting shadows.

To join in with #mondayMasters find a picture of Tatsuo Suzuki that you want to share and share it with the hashtag #mondaymasters.