This is the second part of my travel street photography records from my recent trip. My first trip was down to London where I spent a couple of days there but my second trip was to see friends in Cambridge. One of whom is Mike Harvey a portrait and landscape photographer in Cambridge who I went to university with.
I had visited Cambridge a good few times a while back before I was really interested in photography but this was my first trip which would involve taking photos. However, my main motive for going to Cambridge was to spend time with two friends. As such I wasn’t completely focused on taking pictures but I did take pictures.

As I was walking around with Mike we talked about how we had both got into photography at around the same time but gone down different tracks and styles. It was pretty interesting to see and note the differences. After all, I spend 90% of my time using a fixed lens Fuji X100t and more recently a film camera. Mike on the hand had recently got a Canon 5D mark 3 (and upgrade from his old Canon) and used a couple of lenses. He often shoots either wider than me, or closer than me.

Mike knew Cambridge well and I think we circled some of his favourite spots. At the same time I knew the type of light and situations I was looking for and managed to find a few good spots to my liking that I don’t think he would have naturally gravitated towards.
If I had to use broad strokes to describe what we look for, I try to remove a lot of context from the place I’m in (especially in the background) where as Mike tried to incorporate it more. As I say, broad strokes but perhaps with some truth.
Mike certainly said that he was looking for reflections in puddles and there was one moment that I really liked from his vision and the reflection that he saw. It’s funny as since then I’ve been looking for more reflections, not only in puddles but other places. Mike also knew locations where the light was good and also had strong lines in the buildings. 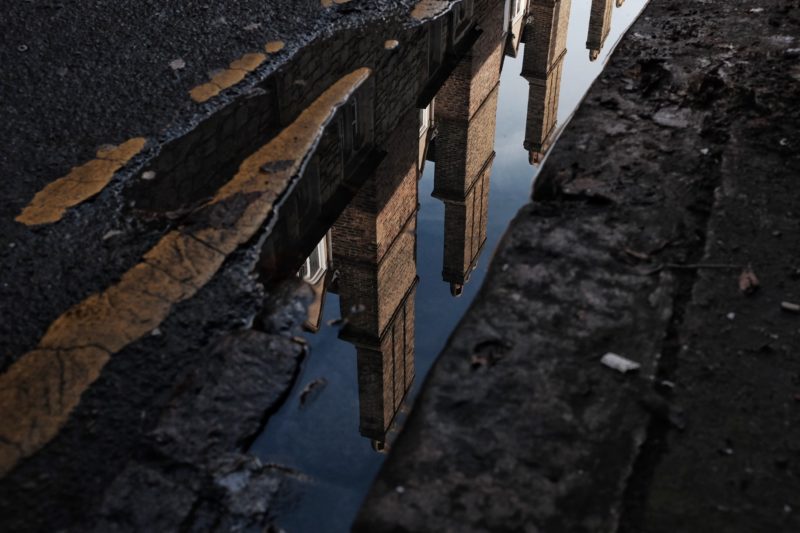 Cambridge is basically full of two things. Students and tourists. Of course, you also have other things like people who have grown up there and the historical buildings, but the two factors of tourists and the university are very hard to avoid. if I’m right, Cambridge collage is the third biggest land owner behind the queen and the Church of England. That’s how big it is (admittedly it’s much smaller than both of those two but you get the picture.)
We mostly stayed around the centre of Cambridge which probably exaggerated these two factors. I’m certain that if we’d hung out beyond the river or further from the city, we’d have seen a very different side. still, there are plenty of opportunities that arose from that.

There are two different groups of locations I could advise. The first are more touristy locations that you’ll see plenty of other photographers shooting at. This presents the fun challenge of taking a photo which someone else wouldn’t take there, brining your perspective to it.
The second are less touristy and so are easier to bring something more creative to. Having said that, these spots are also less clearly identifiable as Cambridge so that might be an impediment.

Sure there are other locations but King’s Collage is very picturesque (both the front and back) and is probably the collage you think of when you think of Cambridge. it’s also very long and gets lots of tourists in front of it. The road has a lot of shops on the other side (including a cool camera shop that has some Leicas and stuff). The fact that there is a gap between kings collage and the road makes from some bright light To illuminate your subjects.
The river cam cuts through Cambridge and the punts make for some classic photos along with other people doing silly things by the river.
The central market helps connect things together, has a lot of footfall again and has some good foo. Great for refuelling between stints of shooting. You can also get away with shooting “things” and “accidentally” getting people in the frame. Plus it again lets in a lot of light which helps light things up and get long shadows later on. there are a couple of old churches near too that make for good back drops.

I’d advise two approaches to finding more interesting shots in Cambridge, first is to look at the narrow roads. there are lots of little pedestrian paths that make for moody shadow infused images with shafts of light.
The second would be to head over towards Jesus green by Jesus collage. The river starts to change character a lot and the whole area becomes more residential. This opens up some very different images from others that people take, yet it’s still a good area and distinctly Cambridge.

Cambridge might have one of the best reactions to being photographed that I’ve experienced yet. People are clearly so used to tourists that they just ignore other people taking photos. as I was looking back through some photos I saw that people had been laughing at me at some points (nice) but other than that, it was hard to find even a stare.
if you are worried about people’s reactions, you couldn’t pick a much better place to start. 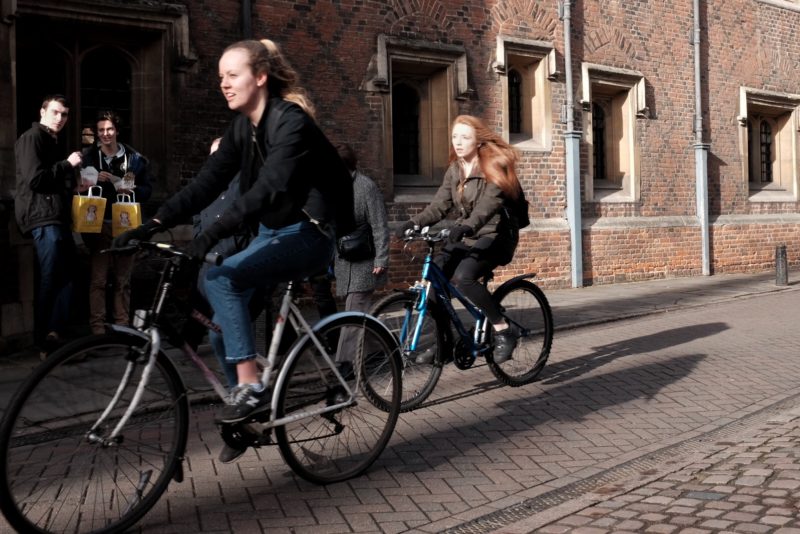 I had a great time with Mike and I think Cambridge could be a great place to shoot street photography. I could see a real danger in falling into tourist photo traps but that’s also a great creative challenge. In many ways I think that mimics some of my experience in Krakow where I no longer go to the main square nor florianska as I know it’s been photographed to death and I want something different. Yet I still shoot almost daily at most ojca bernatka as a creative challenge to get something different.

Do you have any tips on shooting in Cambridge?